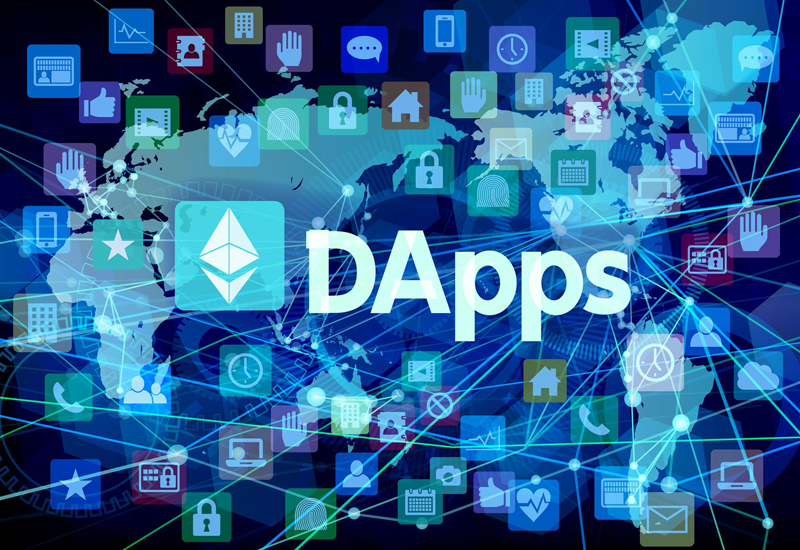 Dapps stands for decentralised applications. This is seen by many as a revolution in the way we view software. The Dapp could, in the future, run our cars, our fridges, use any excess of memory in our computer for world good… in short, it is the superhero of the computing world.

We may be overstating it a little. Dapps are applications that are not connected to a centralised system and can therefore be used to run almost anything and everything.

Before you can hope to grasp what this all means, you need to understand Blockchain. Blockchain is the underlying technology behind most of the cryptocurrencies that we know. It is a digital store of consensus truth. Mm, what?

Consensus truth is that lots of people agree on the same transaction and so validate its existence as being correct. I know. This is getting complicated.

Normally, when a transaction is processed it is through a third party. You fill in a form, the person you are dealing with fills in a form, both forms go to the third party. Then, the third party goes yes or no depending on whether they agree with the information provided. This is a centralised transaction. Blockchain works by being decentralised – lots and lots of people – known as miners or validators (amongst other names) process the transactions. The validation process is irreversible and preserved forever – and can be seen by anyone.

How does this work with Dapps?

There is yet to be a single definition of a Dapp. This is because the blockchain technology is being leveraged in lots of different ways – all of which come under the umbrella of applications. There are some common features, however, that are worth exploring.

First, the dapps are open source. This means that all changes to the app must be decided through consensus – the majority of users of the app. Some Dapps give you voting rights based on the number of coins that you hold. The code of the application must be available for scrutiny by all those invested in the application.

Secondly, Dapps have to be by their nature decentralised. This means that the operations much be on a public and decentralised blockchain – to avoid someone taking ownership and centralising the decisions of the application.

Thirdly, the application needs to be run on a basis of incentives – or through the giving of digital tokens. These tokens can then be traded, and fiat currency earned from this trading.
Finally, the Dapps have a specific protocol that facilitates the consensus within the community of users – or show proof of value.

The first Dapp was Bitcoin – as this moved away from centralised, third party institutions in the exchange of funds between parties. This application is a self-sustaining public ledger – or a massive digital accountancy book – that allows transactions to be posted and then validated.

Ethereum, like Bitcoin, is a Dapp in itself, based on the loose definition provided. However, the people at Ethereum wanted to take the idea further and make it possible for other software users to produce apps that could lessen development time, increase security and facilitate scaling. Using Ethereum’s coding language, Solidity, developers can form smart contracts. This has been put to use in software from asset management to resource planning. Most of the existing Dapps, written using the Ethereum protocol, are focused on changing the way economies work.

With the increase in value in Ethereum comes an increased interest in dapps and the possibilities for the future. There are people across the world becoming acquainted with the Solidity coding language and working out how to make the most of blockchain technology.

How to become a Dapp developer

The first step in developing a Dapp is to write a white paper. This white paper will lay out the problem that you want to solve and state the intentions of the Dapp. It should explain how you will distribute the tokens, which are a vital part of incentivising use of the application. You will need to decide on how you will establish consensus and layout the technicalities of developing your idea to realisation.

You then publish your white paper in Blockchain communities and seek feedback, using this feedback to revise your plans. This is also a great way to gain a following – as people giving feedback have shown an interest in your idea.

Once you have revised your Dapp based on feedback you then initiate a crowd sale. This, as the name suggests, is a lot like crowd funding. You put your idea out there on a set date when you decide you want people to buy in to the idea by buying your tokens. The investor will need all the information available to help make the decision to buy or not to buy.

Then, with funding in place, the development begins, and decisions are made based on the consensus of the group of people who have tokens in your Dapp.

The birth of a Dapp

The birth of a Dapp is called an initial coin offering (ICO). This is the fundraising event – or the selling of your tokens to raise money to fund the application. The value of the token is arbitrary and completely depends on what people are willing to pay. This is partly due to supply and demand and a lot to do with market confidence in the idea. This is why the white paper and the response to feedback from the community is so crucial to get the funds you need to make your idea work.

The Dapps eventual value will be defined by a number of factors. The usefulness of the Dapp is a major factor – and usability. It is not just about how many tokens are released and what each token is worth. This might be the market cap, but often this is a poor indicator of the overall value of an app. This depends largely on the ability of the mechanism created to solve a problem people need solving.