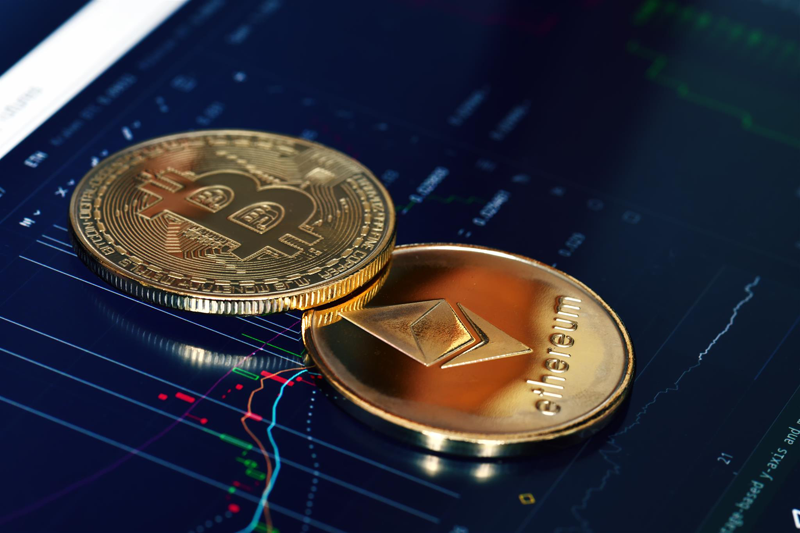 Both Bitcoin and Ethereum are cryptocurrencies; the leading virtual money in the world. But, if you are investing now, which would be the better option? Are Bitcoin and Ethereum really competing for the same market space? Are the fortunes of these digital currencies tied together? Here we explore the two giants of the cryptocurrency world and compare their prospects for the future.

Bitcoin emerged way back in 2008. It is the original virtual currency and was the invention of a developer known by the pseudonym Satoshi Nakamoto. The point of the technology was to offer lower transaction fees than other online payment options. There were also bigger ideals – the desire to take financial control out of the hands of centralised institutions such as banks and governments. With the dispersal of control comes the democratisation of currency – or so the theory goes.

There is no physical manifestation of the currency – such as a coin or a bank note. The value of the currency is associated with the balances held in public and private keys. How much these keys are exchanged for are determined by supply and demand. If the demand goes up so does the price. The price of Bitcoin rocketed in a short period when people realised the potential for the cryptocurrency.

What is more interesting for the future than Bitcoin itself is the technology it is based on. The blockchain is a public ledger of transactions – which grows continually as new blocks are added. As the blocks are added in a linear, time-based order with the help of cryptography, the transactions cannot be manipulated. It is a tamper-proof record of transactions. However, as the transactions are processed anywhere by anyone, the payments cannot be tracked. This means that as well as reduced risk and enhanced efficiency, those involved can trade confidentially.

Ethereum emerged because of the potential of the blockchain technology. It moves beyond using blockchain as a means of financial transaction to a means of creating decentralised applications. Ethereum is more than just a platform, it is a programming language that allows developers to build and publish applications without third party influence.

Ether is still traded in exchanges, just like Bitcoin. Just like Bitcoin, people prospect on the possibility that the price of Ether will rise. However, Ether is also a means of monetizing a project, with developers receiving Ether in return for use of their application.

Both Bitcoin and Ethereum work using blockchain technology – powered by the ideas of distributed ledgers and cryptography. You can trade Bitcoin and Ether through exchanges and both can be held in a digital wallet.

Yet, despite sharing the same space in people’s minds, Ethereum and Bitcoin are actually very different. First, they use a completely different coding language – but the differences are even more fundamental than this. Bitcoin is meant as an alternative to money – to fiat currencies. Bitcoin attempts to disrupt the centralised control of money by banks and governments. Therefore, its value is in the mechanism for facilitating international transaction.

Ethereum, on the other hand, was developed as a means of facilitating Smart Contracts – peer-to-peer contracts – and Dapps. The currency created is just a means of navigating within the platform. Ethereum does not want to act as a means of payment in the wider sense. Ether is used as a means of enabling payment for the work of developers.

Ethereum is considered a second-generation cryptocurrency. It is perceived to be an advancement of the principles behind blockchain. However, it does not compete directly with Bitcoin and both platforms have forged their own niche. Bitcoin continues to be the most expensive cryptocurrency in the sector, with Ethereum coming in second – but by a fair distance. Yet, market cap for Ether is more complex than Bitcoin, as the applications make it potentially more valuable than the price of an individual token.

It is difficult to predict the future of such a disruptive technology. The only thing that can be said for certain is that the number of different cryptocurrencies – or altcoins as they have been named – will continue to grow. Many of these virtual currencies seek to compete with Bitcoin, as a means of transaction of payment. The coins include Ripple and Litecoin in particular. Some of these tokens seek to compete with Ethereum in providing Smart Contracts and dapps, including NEO and Cardano, as two serious competitors.

There are three issues that both Ethereum and Bitcoin will need to address if they are to continue to compete. These issues include: scalability, speed, and regulation.

The popularity of Bitcoin in particular has proven an issue for the platform. The size of the blocks is kept small in order to prevent hacking and other security issues. However, this makes processing of transaction slower and therefore the number of transactions per second is in the double digits. This means Bitcoin cannot compete with the likes of PayPal and VISA, who number transactions in the thousands per second. Bitcoin Cash is a hard fork from Bitcoin and attempt to solve this problem.

However, the fortunes of Bitcoin are closely tied to the fortunes of the other cryptocurrencies. Therefore, Bitcoin’s price tends to influence the price of all others. The recent surge in Ethereum prices was seen as a direct result in the increased confidence in Bitcoin. So, even though Ethereum and Bitcoin live in different market spaces, with different aims, their fortunes are tied together in the consciousness of the investor.