Binance Coin vs Tether – A comparison in 2019 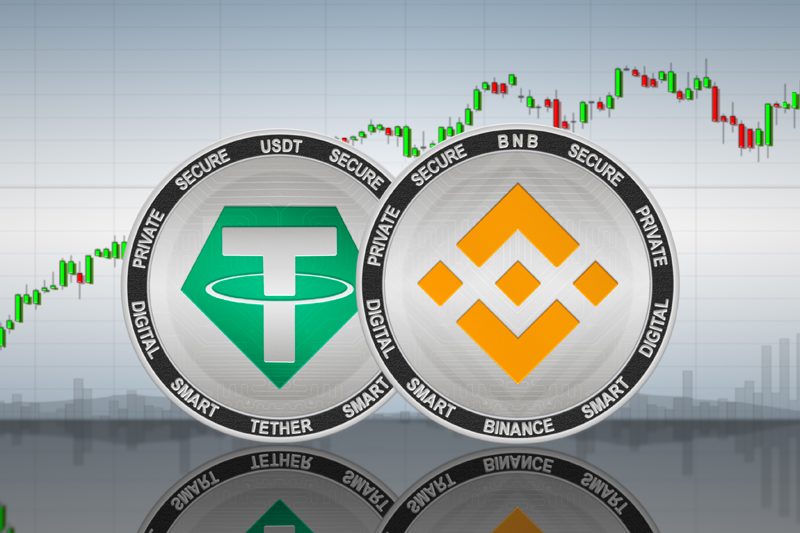 Binance Coin vs Tether – A comparison in 2019

The comparison that we are going to take a close look at is between Binance Coin and Tether coin. These two coins have been in a tight tussle for ranking, with Binance just a spot below Tether coin. We all know that this year, the Binance Coin has continued to gain in multiple values as a result of the series of incentives programme put together by the CEO of Changpeng and Binance. This has caused a massive increase in the value and market cap of the Binance Coin since the beginning of 2019. But a different story presents itself with Tether – there have been recent media stories that allegedly linked it to bitfinex covering for its loss of over 800 million USD. Though many have seen a better chance for Binance Coin taking over, Tether coin still remains strong in its current market cap.

Before we get scared of the recent stories that surround Tether’s alleged loss fund, let’s take a quick comparison between the two coins.

What is Binance Coin?

Binance Coin is the native token of the world’s second-largest exchange – Binance. Its symbol is BNB and it is driven by three technologies making it an ERC-20 token. Binance Coin is the gas that will power the Binance Exchange platform and it will be traded against cryptocurrency and other fiat currencies. It was launched in 2017 to help investors access its exchange platform with ease.

Ever since its ICO was launched, BNB has grown rapidly in the coin market superseding most coins. One of the reasons why BNB has grown massively was not only because it has an exchange platform, but because its exchange matching engine is capable of matching more than 1.4 millions of trade per second. This makes it one of the fastest trading platform in the blockchain industry. As at when this article was published, Binance currently sits at the 8th spot in market cap with over $2 billion in market cap. Its current circulating supply is 96.58 million BNB with its price hitting $22 for 1BNB.

What is Tether coin?

Tether coin is a stable coin that is pegged to the dollar. It was designed to always be worth $1. With the use of its blockchain technology, the Tether will allow you to trade its coin pegged to the dollar and even euro. Ideally, this means that Tether trades on 1:1 against the dollar in all exchange and can be used as a close substitute to the dollar. This unique feature has created a stable value for the cryptocurrency.

Tether was launched in 2015 as a stable coin that can be theoretically pegged to the USD. Tether ownership is limited and is governed by the laws of the British Virgin Island. Ever since Tether was launched four years ago its current market cap is $2.43 billion placing it in 7th position one spot above BNB. Its current circulating supply is 2.47 billion USDT.

Differences between BNB and Tether

Both BNB and Tether have shown slight similarities but there is one key difference between the two which we will discuss here.

BNB is a coin that was initially launched as an ERC-20 token that can run in Ethereum blockchain. This means it can be traded easily with Ethereum and another ERC-20 token. But recently, as at last year December 2018, the group announced that its custom Binance chain will be launched and its mainnet swap. According to this swap, its token would be converted from ERC-20 token to BEP2 BNB which is the native for the Binance chain.

Tether cryptocurrency is a stablecoin pegged to USD. These are coins designed in order to reduce the volatility of crypto coins. One area by which Tether uses these types of cryptocurrency is in the backing of Tether coin with the use of fiat currency like the dollar. In stablecoin, their value is pegged to one or more currency in a fixed ratio.

There have been some significant changes in the growth rate of both BNB and Tether in 2019. But one coin that has shown massive growth is the Binance Coin. A report from OnChainFX has rated BNB as the only crypto asset to achieve an all-time high this year. This growth is as a result of the migration of its ERC-20 token to BEP2 BNB which is the Binance chain. Ever since this transfer has been done, it has been noticeable that the level of profit has hit a scale of over $70 million in the first quarter of 2019. This growth has been perceived by most crypto investors that Binance Coin can be the real deal for 2019 in the coin community.

Also, many people do not believe that the Tether coin can soar in 2019 because of the allegations linking it to a loss of over $800 million. But a number of predictions by various experts have stated that it can triple the value of a dollar or even reach as high as $5 for a Tether. Some predictions like coinfan.net has predicted that Tether will reach as high as $7 by the end of this year.

If we are to compare the overall success between BNB and Tether, the BNB should come out first. But currently, in the coin market, BNB has shown a massive increase in market cap with over $2.21 billion with a 24 hour trading volume of close to $200 million. Its rank now places BNB in 8th with a BNB valued at $23.

Tether supersedes BNB with a factor of $0.2 billion placing it a step above BNB. But its 24 hour trading period as at 3rd May is close to $20 billion making BNB ten times more traded. Its pegged value to USD is slightly above the $0.50 mark.

Conclusively, both BNB and Tether have shown a promising start for 2019. Truly it has been a struggle to be ranked within the top 10 in the coin market. But what hopes are there for other coins? Will it only be a struggle for only the strong or a fair challenge for everyone?